Snow mould and take-all patch are both caused by fungi, but since they’re both quite damaging to lawns, we thought it would be helpful to provide more information than was possible within the scope of the Fungi article.

Snow mould, or fusarium patch, is a common cause of brown patches in lawns, and is caused by a fungus, Monographella nivalis. It is a very damaging disease of turf grasses, and is very hard to control. It is most commonly found in autumn and during spells of mild weather in winter, and appears as yellowish patches of grass, which turn brown, increasing in size to 30cm or more. During wet conditions, you may notice a pinkish or white cottony growth, especially at the edges of the patch. It is particularly troublesome with annual meadow grass (Poa annua) but may also affect bents (Agrostis species), fescues (Festuca species) and perennial rye-grass (Lolium perenne). 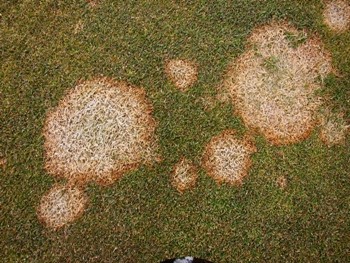 It’s very difficult to treat snow mould, but you can try to keep the lawn drier, by spiking it and removing dew in the mornings. It also helps to improve the air flow over the lawn by cutting back any low-hanging shrubs. You can also try using a fungicide. As with red thread, the only fungicide available for domestic use is trifloxystrobin (Bayer Garden Lawn Disease Control). You can use it anytime, unless it is very dry or the ground is frozen, but not more than twice a year. Adding iron sulphate is also recommended, to toughen the grass and acidify the soil, discouraging the fungus.

Take-all patch also causes brown patches in lawns, especially in lawns that have a high proportion of bents (Agrostis species). Most lawn turf, at least the turf that you buy from turf suppliers, contains a low proportion of bents, but this can change over time in mature lawns.

Infection is most likely to happen in periods of drought, when the lawn is under stress. You will know that you have a problem with take-all patch if you see patches of grass that have reddish leaves turning to brown as the grass dies. The patches can vary in size from 1-2cm up to 1m or even more in diameter. The centre of the patch often looks quite different, as it can become colonised by resistant grasses such as annual meadow grass (Poa annua) or broadleaved weeds taking advantage of the space. The roots blacken and decay, and you can usually peel back the affected turf, as it has no roots.

There is no chemical control, and the best thing to do is to overseed quickly with grass that is resistant to take-all patch, such as rye grasses or fescues, or patch with turf containing resistant species

When you subscribe to the blog, we will send you an e-mail when there are new updates on the site so you wouldn't miss them.