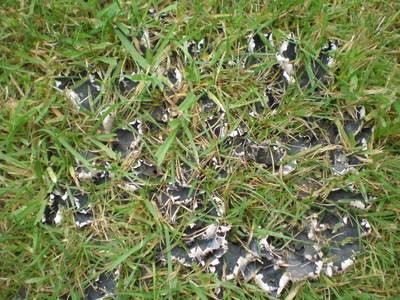 Fungi can appear in lawns for a variety of reasons, and not all are a problem, although they can look unsightly. This article gives you a bit more information about the most common fungi to appear in lawns.

These fungi are often seen in lawns, and cause circular rings of dead grass or small brown toadstools. The most damaging of the fairy ring fungi is Marasmius oreades, which lives in the roots of the grass, and alters its appearance. Unfortunately, there are no chemical controls, and it’s not really worth sweeping up fairy rings, because they produce so many spores.

You can treat the dead patches by spiking and watering, as this helps to reduce the water-repellent effect of the fungi. Feeding the lawn will also help the grass to grow again into the dead patches.

These are fungi living around the roots of trees. They generally don’t cause a problem, but can suddenly appear around the base of a tree, and if that tree is in the middle of a lawn, this can be a source of irritation to the gardener! However, since they are generally beneficial to the tree, they are best left alone.

These are fungi that feed on dead or decaying plant or animal remains. They sometimes produce large numbers of fruiting bodies, that appear as mushrooms or toadstools. If that happens in a lawn, they do look a mess, although they don’t do any harm to the lawn. Unless you’re certain they’re not poisonous, try to keep children and animals away from them. And if you don’t want them there, simply sweep up the fruiting bodies and dispose of them, preferably before they open and spread their spores!

There are a wide variety of slime moulds that appear on lawns, but most of them do not attack or kills the grass, only look very strange and unsightly. A slime mould is a very primitive organism, simpler even than a fungus, and the different sorts of slime mould vary greatly in appearance and structure. They are most common in late summer and autumn, although they can appear at any time. The structures appear suddenly, but are likely to disappear nearly as suddenly, and no control is necessary. If you find them particularly unsightly, you can spray them with a jet of water to disperse the fruiting structure.

Snow mould and take-all patch are also caused by fungi. Both these two lawn conditions are very damaging to lawn turf, and much more difficult to control than the other fungi in this article, so we have provided a separate article on these two, with a bit more detail about how to control and eradicate them.